Recently in the East Kingdome of the SCA a number of challenges were issued.  I decided to take up four of the challenges, with two projects.  This post discusses the second project [the first project is discussed in this blog post.

This second project was to answer Wool Applique Cushion by Sarah Davies and  "Ooo, Shiney!" - A Goldwork Embroidery Challenge by Amalie von Hohensee. The cushion challenge was for "a reading cushion, pin pillow, or similar project of appliqued wool, in the style of the 14th century Tristan hanging in London or the Jesse Wurzel in Branshweig." The referenced pieces are hangings, one of which I have had the opportunity to see at the V&A, though not too closely.  The Tristan hanging is a large wool applique hanging which has gilt leather couched at the edges of motifs. In addition to the many photos on the V&A website, I was fortunate enough to take some when I was in London, which can be seen here.  I mentioned to Mistress Sarah the similar, though somewhat different technique piece at the Metropolitan Museum of Art. In further discussion about the availability of the gilt leather, a group's efforts to recreate a similar piece in Sweden. Armed with all of that information. I started looking for what to use for the gilt leather -- a goldwork form I have not tried before - with good reason, it is hard to find something to use. A friend also working on this challenge had excellent results with some purchased and cut down leather which she then gilded herself.  Then mostly by chance, I came across this item on Amazon.

Having taken much more time than I planned on the first piece, I had little time for this piece.  I focused on "pin pillow" and decided that I could do within the time available. I raided the wool scraps available in my studio and pulled several out, together with assorted threads. 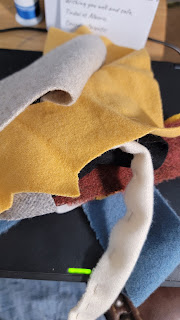 Since I am familiar with the basics of applique, I knew I could turn those materials into a pin pillow.  The reference pieces, in addition to the large figures, have assorted floral motifs, so I decided to use a floral motif for my pillow.  I added also a frame for the top, to have more applique and more chances to play with the leather. 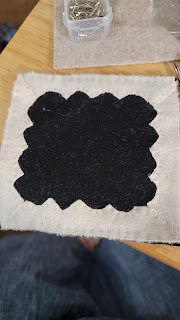 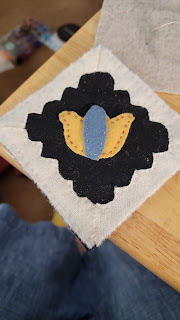 With those laid down and stitched in place with silk running stitches, it was time for the leather.  I cut individual fringes off the bunch and worked them in my hands a little bit to make them a bit more pliable. Then I carefully couched the leather down around the main flower and the edges and corners of the frame.  I was pleased with how well the leather worked around corners and bends.  The thread used to couch the leather down was a gold color silk.  The threads show, but I believe they do not detract from the piece. 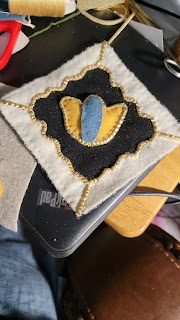 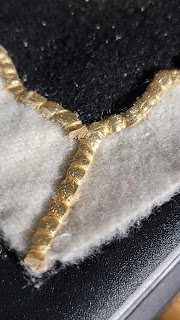 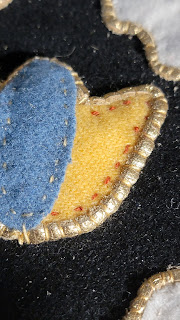 Finally, I selected a fabric for the back of the pillow and made up an applique of my badge, which I also use as a "maker's mark" using silk thread to decorate and afix it to the back. 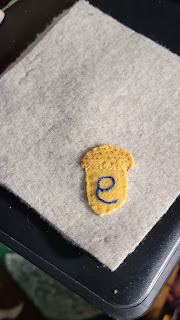 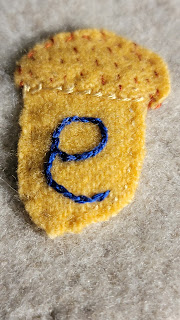 I have not yet assempled the pin pillow, but I plan to use crewel wool to blanket stitch the pieces together, stuffing as I go.

Summary and what I learned

I look forward to working in this form for a larger piece.  Perhaps adding the intarsia technique used in the piece at the Met and others. I have some of the leather obtained by my friend and I intend to experiment with that and my own gilding, as I think they may be closer to accurate. Perhaps in the future this will lead to a piece for Period Competency with Athena's Thimble.
Posted by Kandy/Elizabet at 6:48 PM No comments:

Clearly, this will be a sometimes blog.  When I have something to talk about, it will be here.

Recently in the East Kingdom of the SCA, a number of challenges were issued. I decided to take up four of them by making two projects.

The one category in Athena's Thimble I do not yet have Competency in is Needlelace. I may be that rare embroiderer who likes both counted and uncounted embroidery, but the lack of ground fabric is different to both of those.  Amy referred to "that 'thing' that intimidates" and Needlelace has been that thing for me for some time. I decided on Reticella lace.  There are numerous extant pieces including Reticella, both as insertion lace, and as edging  It is a late [SCA] period needlework form.

I started, as I start most things, doing some reasearch✤ (spoiler alert - not enough).  Ultimately, mostly worked from the ground preparation and stitch information in The Open Canvas, and Cut-Work Embroidery, mostly from The Open Canvas. Clearly, though I missed some important points (more on that below).

I found a piece of a reasonably even-weave scrap linen in my scraps bin, and pulled some Bockens 35/2 linen thread from my stash.  Projects from stash are always satisfying - not just because they use up stash, but because there is neither going out nor waiting for orders. 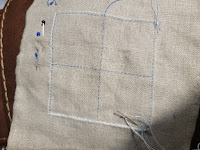 I started by hemming the fabric and marking the center lines. Three rounds of stitching (running stich, whip stitch, then buttonhole stitch shored up the edges so they would remain stable once the threads were removed.  I carefully clipped and removed threads, leaving 4 in the middle of each edge, and being very careful to make sure they were the same four on opposite sides. Those middle threads were then strengthened with needleweaving. The diagonal threads were added and wrapped.
With the main bars woven and wrapped, I pinned the whole thing to a lace pillow over the pattern for general guidance. Spoiler alert: I should have done the tacking stitches.
Following the stitch instructions in The Open Canvas, I did the corner arcs, the circle and the middle arcs. I removed the piece from the pillow, wove in and clipped the ends and it was done. 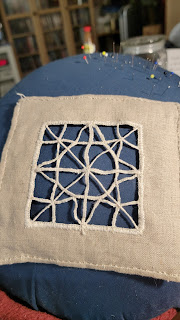 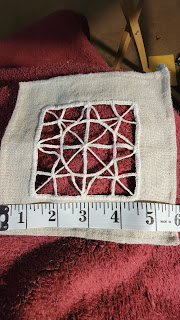 Summary, and what I learned.
Tension was a big problem.  Two sources described tacking or couching the work to the pattern, however, I was working mostly from The Open Canvas which does not include tacking the fabric down. However, that does expect the work to be done on a needlepoint style canvas, which is stiffer than the linen ground I used. Even pinning the work to the pillow, my fabric did not allow for adequate tension -- tacking would have helped that. The buttonhole stitched elements got loose and twisted.

I also should have gone with my usual inclination of working as small as I can get away with. It was not until after finishing this piece that it occurred to me to add YouTube to my research.  I now have plans .... so many plans.
This piece will be mounted to a backing fabric, padded, and mounted to a box for the storage of trinkets.

Cave, Oenone, Cut-Work Embroidery and How to Do It

Posted by Kandy/Elizabet at 5:19 PM No comments:

As I mentioned, for a little while anyway I'm dropping this blog to "when I have something to say" -- but I'm still going to bore you with my Thursday honesty:

Sleeping projects (SCA/Historic): Being honest, I don't expect much to be done with these until after September, though maybe the event cushions will get pushed out.

Blog notes:
So, that's it for my plans for the coming weeks.
Posted by Kandy/Elizabet at 6:51 PM No comments:

Welcome to A Study in Textiles

Follow my journey as I research historic textiles (through books, journals, websites and museum visits) and work to recreate pieces and create new pieces in the same styles and manners. My historic work focuses primarily on textile arts of 1600 and earlier.
But, it's not all about history -- and it's not all about pre-1600 history. I enjoy working with most string and fiber based arts and there will be entries on modern knitting, crochet, sewing clothing for work, 17th, 18th and 19th century items seen at historic sites ... if it is done with string and fibers, it is fair fodder for A Study in Textiles.

Kandy/Elizabet
Embroidery, card weaving, knitting, crochet, bobbin lace, fingerloop braiding ... if it's done with string and/or fabric, it's fair game. My participation in the Society for Creative Anachronism (SCA) has lead me to in depth study of historic textiles.

Other things to see